East Indians began to immigrate to Canada after Queen Victoria’s Jubilee Celebrations in British Columbia. However, the numbers were relatively low, as Indian immigration became apparent around 1906 when approximately 2000 Indians worked in Canada, a majority of them in British Columbia.[1] East Indians were not the only Asian group being monitored at this time, as Wilfrid Laurier passed a Chinese emigration tax to deter settlement. This “head tax” tax was raised in 1903 to $500. Though there was pressure on Laurier to place taxes on East Indians as well, he was wary, as India was a part of the British Empire. Indians as part of the British Empire were permitted to reside in Canada, but Canada had an anti-Asian agenda. In 1908, the Canadian government put laws in place to make it essentially impossible for East Indians to settle in Canada. It became mandatory that passage was direct from India to Canada and that each passenger had two hundred dollars.[2] To make matters worse for Indian Canadians, families were not allowed to join men who already resided in Canada.[3] These laws were challenged in 1914 when a ship from Hong Kong, the Komagatu Maru, with 375 Indian passengers, were not allowed on land. They were forced to stay on the ship while debates about the matter occurred for two months. Eventually, they were forced to leave the Canadian coast without ever having stepped foot on shore.[4]

Despite these anti-Asian attitudes and attempts to put a stop to all Asian immigration, Bukkan Singh decided to enlist into the Canadian Army on April 23, 1915. Born in Makilpur District in Punjab India in 1893, Bukkan immigrated to Canada and settled in Toronto. It should be noted that on his attestation papers, Singh’s religion is listed as “The Church of England.” He served overseas in the 20th, 38th and 59th battalions in England and France. An independent filmmaker and historian, David R Gray, found that only ten Sikh Indian men are known to have served in the Canadian army during World War One.[5] Bukkan’s pension file reveals that he suffered a gunshot wound to the head in June of 1916 and a gunshot wound to his left leg in July of the following year. Gray’s research discovered that Singh’s first injury occurred at Vimy Ridge and the second injury near St. Aloe, returning to combat after seeking hospital treatment on both occasions. Gray even discovered that one of the hospitals that Singh was treated in was headed by the famous doctor, John Macrae.[6]

Singh’s pension file also reveals that as a result of his service, he contracted tuberculosis in 1917. He would suffer with the disease for two years, dying in 1919 in Kitchener, Ontario. Gray’s documentary reveals that Singh’s grave would be forgotten until Sandeep Singh Brar, a Canadian historian, found Singh’s victory medal in a British pawn shop.[7]

While Singh was ill with tuberculosis, he received 100% of his pension. However, when his wife tried to claim a widow’s pension after his death in 1920, matters became highly complicated. On Singh’s attestation papers, he claimed that he was single, and listed his next-of-kin as his mother and brother. A member of the BPC said that he did “not consider that the fact of his giving as his next of kin his mother and brother any real significance, as amongst the Hindu, the wife is practically a nonentity.” The Board of Pension commission ruled that further investigation was required in order to prove that the marriage was legal in order to award Singh’s widow a pension. They determined that the marriage would have occurred when he was approximately 11 years old, but this did not discredit the marriage because the BPC stated that child marriage in India was “prevalent.” Singh’s wife and local sources claimed that she was “lawfully wedded to him and that she lived with and was regularly supported by him prior to his enlistment in the Canadian Expeditionary Force.” The Board claimed that Singh’s widow was “no worse financially” and that it was “suggested that he had no intention of complying with the Christian custom of living with the applicant upon a domestic basis.” Despite an appeal, Singh’s wife would not receive a widow’s pension.

Bukkan Singh’s pension file reveals that minorities were a small, but important part of the war effort. It is important that more research continues to be conducted on these minorities in order to reveal their important contributions to the Canadian war effort.

[1]  Hugh M. Johnston, “Introduction: South Asian Emigrants and the Empire,” in The Voyage of the Komagatu Maru: The Sikh Challenge to Canada’s Colour Bar (Vancouver: University of British Columbia Press, 2014), 7.

The pains endured from fighting a war do not end with the fighting. For many veterans of the First World War, their […] 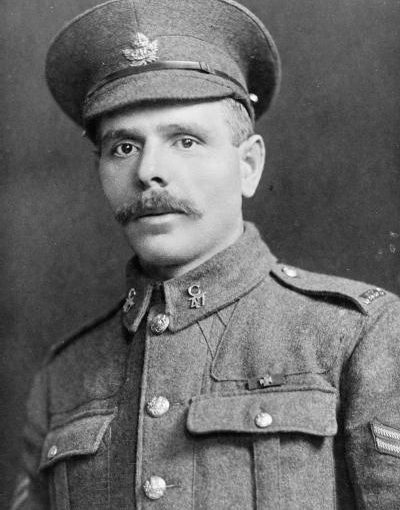 The Victoria Cross is the highest military decoration that can be awarded within the British Empire. During the First World War, seventy-three […]

Captain George Burdon McKean was an Englishman in the CEF and an esteemed recipient of the Victoria Cross during the Great War. […]